Before we get started, here is an overview of what we’ve been up to over the past 3 months so far:

That is 17 new exchanges in the past 3 months! Of course, Binance being the most exciting and thus causing the most excitement. It is great to know that when the bulls are back, they will have plenty of choice of where to trade Groestlcoin!

Groestlcoin Core v2.16.0 is now available for download and brings both new features, bug fixes, and UI improvements, so it is recommended to upgrade to it if you are running a full node or local Groestlcoin Core Wallet. 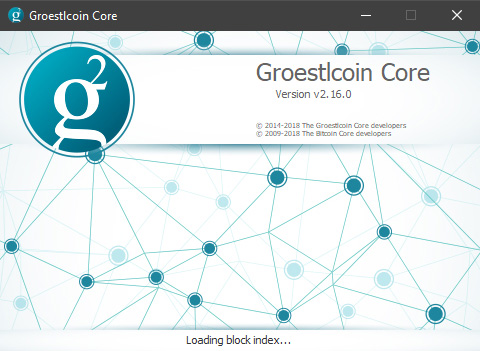 We would like to quickly thank all exchanges, pools and services for upgrading diligently and before our release, all have upgraded smoothly and diligently.

This is a major release of Groestlcoin Core with many protocol-level improvements and code optimisations, featuring the technical equivalent of Bitcoin v0.16.0 but with Groestlcoin-specific patches. In summary, this update makes the Core wallet faster, prettier, cheaper and introduces great new control featuresand includes support to send/receive to/from BECH32 and SEGWIT addresses.

The order of arguments doesn't matter in this case. Named arguments are also useful to leave out arguments that should stay at their default value. The rarely-used arguments `comment` and `comment_to` to `sendtoaddress`, for example, can be left out. However, this is not yet implemented for many RPC calls, this is expected to land in a later release. The RPC server remains fully backwards compatible with positional arguments.

The `-minrelaytxfee` option continues to exist but is recommended to be left unset.

As a result, validating the blockchain during Initial Block Download (IBD) and reindex is ~30-40% faster, uses 10-20% less memory, and flushes to disk far less frequently. The only downside is that the on-disk database is 15% larger. During the conversion from the previous format, a few extra gigabytes may be used.

Electrum-GRS is a lightweight "thin-client" Groestlcoin wallet Windows, MacOS and Linux based on a client-server protocol. Its main advantages over the original Groestlcoin client include support for multi-signature wallets and not requiring the download of the entire blockchain. 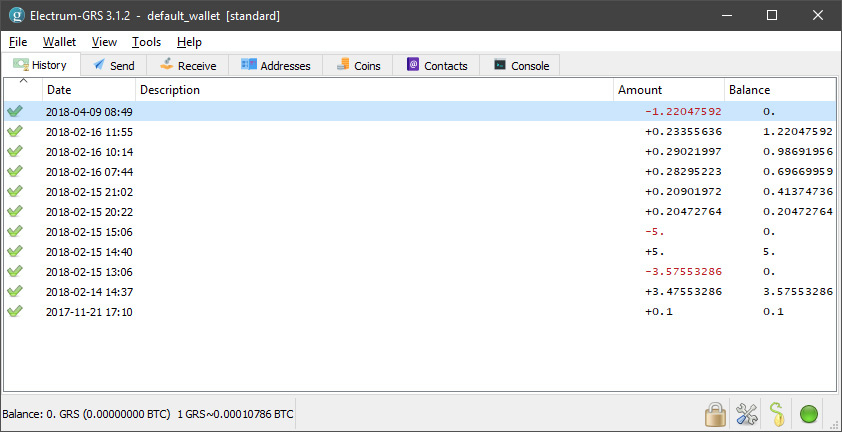 If you are an ordinary user of Groestlcoin and simply want the convenience of a web wallet with the security of a real application and support for multi-signature, then Electrum-GRS is the right choice for you.
Electrum-GRS continues to stay up-to-date with the latest versions, with an update from 3.0.6 to 3.1.2, bringing with it a host of new features.

NOTE: This is not to be confused with Electrum-GRS Android & Blackberry v.1.5.29 which was a fork of Coinomi (before they went closed-source). This version has now been rebranded to GroestlCoinomi to reflect this. GroestlCoinomi will continue to work but is now deprecated, so it is advised to move to another wallet if you are using this.

A BIP-0032 compatible Hierarchical Deterministic Groestlcoin Wallet. The wallet allows you to send and receive Groestlcoins on your device using QR codes and URI links.

Formally Electrum-GRS Android & Blackberry, this wallet is now considered deprecated and will no longer receive updates.

Groestlcoin Vanitygen is a command-line vanity Groestlcoin address generator. You can add a unique flair when you ask people to send you Groestlcoin. Alternatively, vanitygen can be used to generate random addresses offline (like a paper wallet).

If you’re tired of the random, cryptic addresses generated by regular Groestlcoin clients, then Vanitygen is the right choice for you to create a more personalised address.
The speed of which this runs depends entirely on your hardware (more GPUs/processing power, the quicker you can get your address, or the longer the ‘custom’ part of the address will be!).

The P2Pool software encodes the shares into what's called the share chain. This is very similar to the block chain used by Groestlcoin. This chain is built using the computational power miners use to find shares. All the P2Pool nodes maintain a copy of the share chain for the current block and use it to determine pay-outs to miners.

Decentralized pay-out pooling solves the problem of centralized mining pools degrading the decentralization of Groestlcoin and avoids the risk of hard to detect theft by pool operators. Because of the importance of strengthening Groestlcoin's decentralization, some Groestlcoin supporters donate to P2Pool miners, resulting in average returns above 100% of the expected reward.

These testnet releases help implement future releases and implementations faster than ever whilst maintaining the integrity of the main blockchain. The Groestlcoin Testnet is a developer’s playground and significantly speeds up the troubleshooting and development times of new releases.

Groestlsight Testnet is an open-source Groestlcoin Test-Net blockchain explorer with complete REST and WebSocket APIs that can be used for writing web wallets or other apps that need more advanced blockchain queries than provided by GroestlcoinD Testnet RPC.

Groestlsight Testnet REST API provides you with a convenient, powerful and simple way to read data from the Groestlcoin Test-Net network and build your own services with it.

The P2Pool network is now available on the Test-Net. Groestlcoin is the first coin with Bech32 support on P2Pool mainnet and testnet.

This app allows you to send and receive test-net Groestlcoin on your Android/Blackberry device using QR codes and URI links. When using this app, please back up your wallet and email them to yourself! This will save your wallet in a password protected file. Then your test-net coins can be retrieved even if you lose your phone.